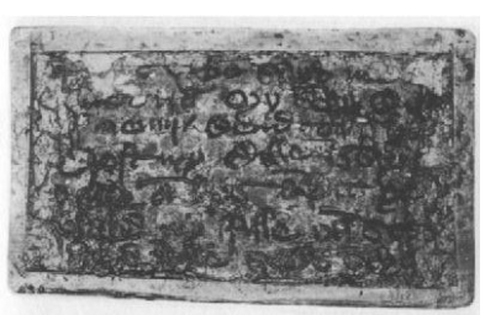 Waxed Tablets
Those with long memories will recall the (mercifully) long dead game show Double Your Money. In which at the high point of the programme the hapless contestant was invited to 'take the money or open the box'. The money was a certainty, yours if you took it; the box was a gamble, it could contain untold wealth or a pair of bicycle clips. This, more or less, was the choice that faced our intrepid conservator Sonia O'Connor when, all research done, the moment came to decide - to open all the waxed tablets or run! Perhaps the comparison is not quite fair, for this was no blind gamble but a carefully calculated decision in which all possible risks had been considered and accounted for. Nonetheless it needed a steady nerve to make the decision to go ahead and do the deed.

The techniques used to separate the first tablets are recorded in the last issue of INTERIM. After careful consideration of the results, those same techniques were employed again, and in a single day Sonia was able to separate all the tablets. As before there were some adhesions of wax from one face to another, but the technique was, on the whole, triumphant, revealing all 14 waxed surfaces for the first time in 500 years. As the tablets were separated our Senior Photographer, Simon Hill, was there to record the work on video (selected cliff-hanging moments to be seen on the next series of Down to Earth), and to make record photographs of each waxed face as it was revealed. His photographs are published here for the first time in their entirety.

Already there is surprise for us in the content of the tablets. As reported in an earlier INTERIM, there is certainly a Middle English prose poem on the first 8 waxed surfaces. But on the last 6 waxed tablets is at least one other document, this time in Medieval Latin. Only a few phrases can yet be picked out, such as the words '..habenda et tenenda', but these are enough to show that we are dealing with a Latin legal document. The two waxed surfaces Vb and Vla appear to contain a list of some sort; whether this is part of the legal document or something entirely different is as yet unclear.

Two main types of work now confront us. The first is a conservation problem, how to conserve the waxed tablets for posterity now that they are separated. The second is to read the whole of the various documents to see precisely what we are dealing with. That we have come so far without loss or damage is a tribute to the skills of those involved. The work may not be as frenetic as a game show, but it is surely as nerve-wracking and rewarding.