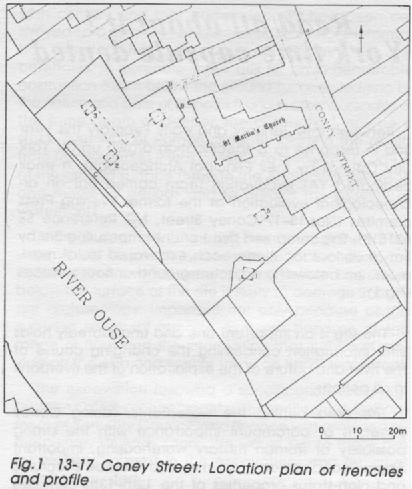 York Time Capsule
Between late January and early February this year and in response to a specification drawn up for York City Council by their Principal Archaeologist, a small dedicated YAT excavation team carried out an archaeological evaluation at the former Evening Press premises (Nos. 1 3-17 Coney Street, NG Reference SE 601518). This comprised five trenches measuring 3m by 3m at various locations, each excavated to, at maximum, 2m below the adjacent ground or floor surfaces (Fig. 1).

The site is an important one and undoubtedly holds vital information concerning the changing course of the river and nature of the exploitation of the riverbank in all periods.

The area behind the waterfronts, facing Coney Street, is of paramount importance with the strong possibility of Roman military warehousing, important Anglo-Scandinavian properties and riverside structures and high-status properties of the 12th-13th centuries and beyond. There is also the possibility of an early cemetery connected with so Martin's Coney Street covering the northern part of the site. But deposits of all periods have considerable potential to contribute to an understanding of the river and the city's use of it, as well as numerous other themes including economic, environmental, artefactual, anthropological, and technological studies.

So what contribution did the evaluation work make to these important questions? Well at this stage the object of the exercise was simply to provide the City Council with information concerning the depth and nature of deposits (usually in a non-destructive way) so that the threat posed by the site's impending redevelopment could be properly assessed, and an appropriate archaeological response formulated.
The work revealed that in the north-eastern part of the site there had been much 19th century dumping of soil, particularly on the riverward side of the site (Trench 3). On the landward Side however a well-preserved structure, possibly of medieval origin, and associated 19th century cobble yard survived within c. 1-2m of the modern floor surface. At a lower level, and very close to the river beneath the modern cellar floor, a medieval wall was found running at right-angles to the Ouse (Trench 2). This may have been connected with staithes or a slipway, but had become covered by at least 1.3m of dumped soils.

The south-western part of the site revealed a similar sequence since towards the river in Trench 1 a lime-stone wall and a stone-lined pit were buried beneath at least 1.5m of modern or post-medieval dumps. The stone features may have both been connected with the northeastern range of the George Inn of late medieval date. Trench 5 nearer Coney Street revealed a series of post-medieval brick features cutting successive deposits of clay probably also of medieval date.

The excavation showed that cellars, basements or deep foundations had destroyed nearly all the upper-most deposits, but the majority of the site below 8.3m AOD is probably well-preserved throughout. This set of deposits is likely to be as deep as any archaeological deposits to be found in York and may go down as far 0m AOD (or deeper) adjacent to the Ouse, tapering back unevenly to around 9m AOD beneath the cellars of the properties fronting Coney Street. This might mean in places a total of up to 8m of deposits (Fig.2). 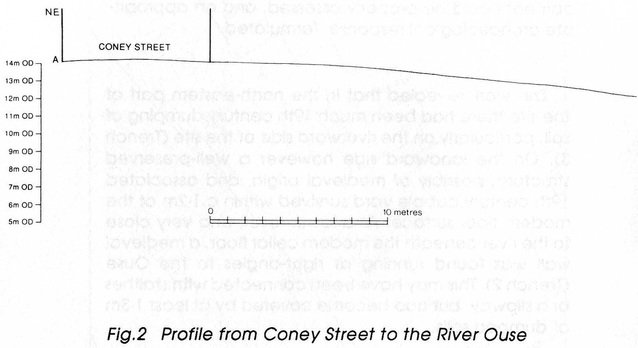 The character of these deposits will undoubtedly vary as much as and according to their depth, but at the lowest levels nearest the river they are likely to be well preserved, waterlogged, rapidly emplaced, highly organic in content and artefact-rich. The landward deposits may be drier, but more complex to excavate.

A report to this effect and stressing the importance and potential of this site has now been sent to the developer, and the city council. If destruction of these important deposits cannot be avoided we may get the opportunity to excavate in a more meaningful way. If preservation can be agreed upon maybe this time capsule of a site can be left another millennium? 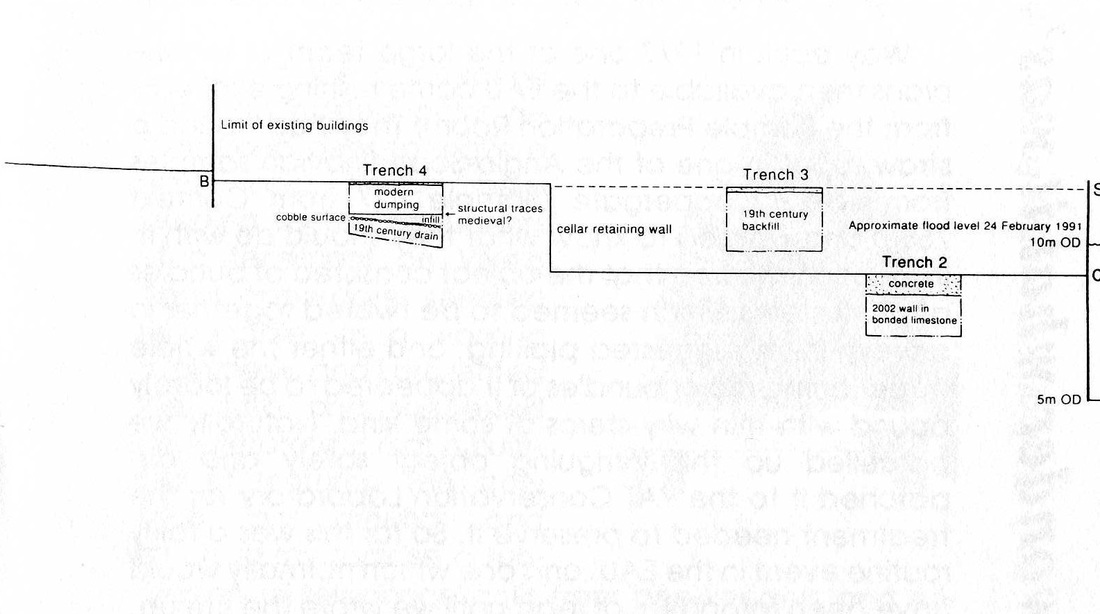