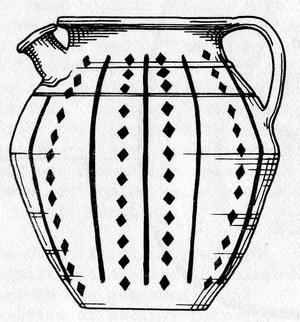 Tating Ware: A Shining Example of Frankish Pottery
In the closing stages of the excavation at the Bishophill I site in Skeldergate, six fragments of an eighth or ninth-century Tating ware jug were recovered. These represent valuable and much needed material evidence from a period when the political, commercial and religious importance of York is well known from historical sources but for which the archaeological record is much less complete. 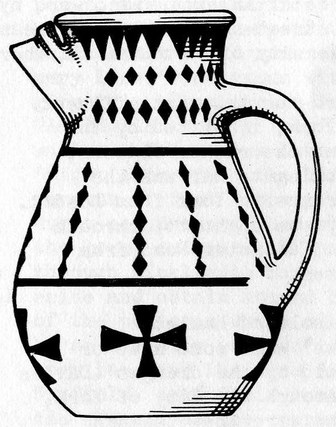 Only a few excavations in England have hitherto produced this type of ware: the important commercial centres of Southampton and London, the Saxon royal palace at Old Windsor, and two sites in Norfolk. On the continent, however, it is more common and finds have been made in Norway, Sweden, Denmark, Holland, and Germany. Its source has always been thought to be somewhere in the Rhineland, and though recent geological analysis has shown that there was more than one centre of manufacture, one of these at least was probably in the Eifel Mountain region in Germany.

The full significance of this highly desirable commodity has not yet been explored, but current theories tend towards its connection with religious communities, bearing in mind especially the equal-armed cross detail. Its wide distribution together with its discovery on ecclesiastical sites in Europe may point to a role in the complex gift exchange procedure between clerical emissaries, whereby exotic objects were donated as tokens of esteem.