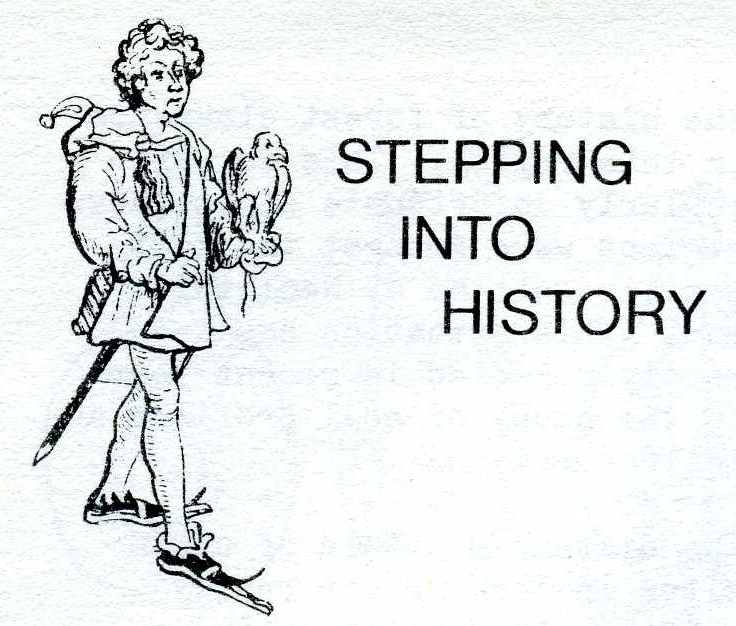 In the preface to her recent monograph, Primitive Shoes, Margaret Hald writes rather wistfully that ‘it must be admitted that worn and broken shoes are without charm’. She is, of course, perfectly correct, but on the other hand changes of fashion through the ages have registered as markedly in shoes as in practically any other item of clothing, so that they have become fascinating indicators of the changing tastes of earlier societies. The grossest and most hideous excesses of today's footwear trade, which we can only explain as the pro ducts of an over-commercialised society desperate for novelty at any price, are really rather poor relations of the grotesqueries perpetrated by the medieval haute monde, while the classless wooden clogs which are now as universal as denim jeans, are the merest shadows of the incredibly attenuated poulaines of late medieval Europe, worn out of doors by both sexes and frequently inlaid with different woods, ivory or precious metal. Extravagant footgear is clearly nothing new.

The earliest shoes so far discovered in Northern Europe are predictably of a more mundane character. Indeed, those of Bronze Age date found in the bogs of Denmark could hardly be of simpler construction, for they consist merely of a single oblong piece of hide folded up over the foot and secured by means of thongs wound round the instep; some measure of comfort was achieved by padding with dried grass or by the use of woollen foot-wrappings. It seems likely that these primitive hide shoes had a considerable ancestry before this time and they seem to have survived with little modification until comparatively recent times in some areas, as we may judge from a letter written to Henry VIII in 1543 by a Scottish monk, John Eldar: ‘... and after that we have slain red deer we flay off the skin by and by, and setting of our bare foot on the inside thereof, for want of cunning shoemakers, by your grace's pardon, we play the cobblers, compassing and measuring so much thereof, as shall reach up to our ankles: pricking the upper part thereof with holes, that the water may repass where it enters; and stretching it up with a thong of the same above our ankles. So, and please your noble grace, we make our shoes’.

Such an archaic method of shoemaking was exceptional by this time, however, and even in Iron Age shoes a considerable degree of refinement may be found. For material of this period we are again largely dependant on finds from the bogs of Schleswig and Rutland: some of these are simply more economically cut versions of the type described above but others, although still made from a single piece of leather, have the edges fashioned into a series of decorative tongues radiating outwards from the foot; a lace passed through the perforated ends of these tongues pulls them together over the instep. forming a light and pleasant-looking pump - not at all the traditional clod-hopping image of the north European peasant.

Although superficially of similar appearance to these Iron Age shoes, the openwork shoes of Roman type embody a significantly improved feature in the form of an extra soles often studded with nails, applied to the outside of the hide, and an insole to cushion the foot on the inside. Other Roman shoes, made like sandals with light openwork uppers, were still provided with heavily studded soles. This was the case with a child's shoe recovered from a timber-lined welt on the Trust's Bishophill I site and illustrated in INTERIM Issue 2-3: the upper is pierced with decorative holes, including on the outer side four triangles arranged in a circle to form a wheel pattern, one of the most common motifs found on Roman footwear. Another shoe from the same well, although larger and less decorative, embodies the same structural features: in both cases the upper is cut from a single piece of leather and the fastening is in the form of a strap across the instep.

It has been suggested that the Anglo-Saxon farmers who settled in England in large numbers following the Roman withdrawal were also shod with heavy boots: Dr Calvin Wells, in Bones, Bodies and Disease (1964) has noted fractured tibias in many skeletons from East Anglia which he attributes to the propensity of these clumsy-footed farmers to fall over the furrows they had just ploughed (in contrast to the Egyptian counterparts, for example, whose lack of any footwear gave them the advantage of a more intimate contact with the soils). However vivid and imaginative this picture, it is not supported by the (admittedly slender) evidence we have of footwear in the centuries preceding the Norman Conquest. Certainly towards the end of this period the most common type is of comparatively light construction and is exemplified by a boot recovered from another of the Trust's excavations, in Coppergate (INTERIM Issue 2-2). The sole of this boot, although cut as a separate unit, is nonetheless of a single thickness only and is blind-stitched to the upper, except at the heel. The method of forming the heel is the most distinctive feature of these boots: the rear end of the sole is pointed and is curved up behind the foot to engage with a v-notch cut in the upper, to which it is stitched with a closed seam. The upper is ingeniously cut from a single piece of leather so that it has only a single seam. A flap across the instep closes the shoe and is fastened by means of a leather toggle engaging with a looped thong. Similar boots have been found before in York at Feasegate and Hungate, and the type as a whole has a wide distribution along to the north European coast to Staraja Ladoga in Russia. The distribution corresponds to some extent with Viking settlement patterns and many of the shoes in question (including ours) are undoubtedly of Viking date. The earliest examples so far identified are from seventh century contexts, however, and it is possible that the type was introduced to the British Isles before the Norse settlement, possible a result of Frisian trading activity. 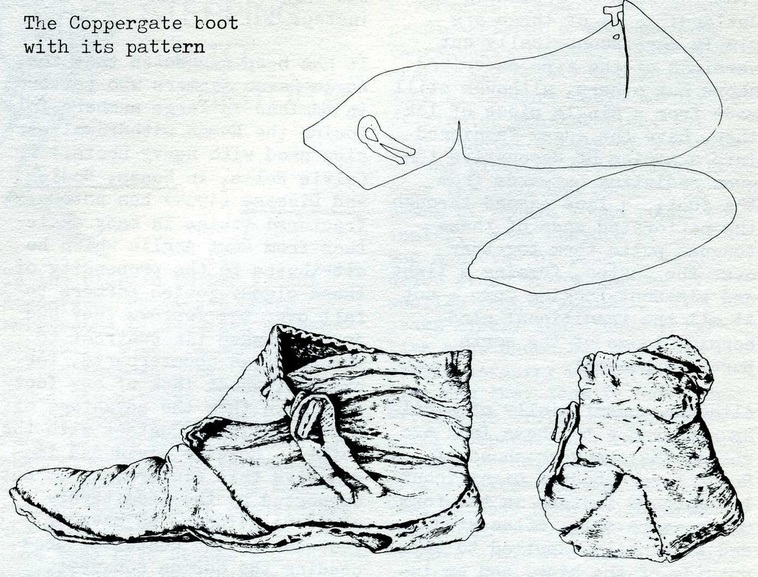 Shoes were similarly produced at this time, with a one-piece upper and a single-thickness sole, although usually with a more ‘conventional’ heel. A child's shoe from Lloyd’s Bank, Pavement illustrates the type: the stitching medium in this instance was an animal fibre, probably wool, but elsewhere in York bast fibres and thonging have been recorded.

Shoes and boots of these types represent the everyday footwear of Anglo-Scandinavian and early Norman York and they are obviously a long way (in every sense) from the developments which were taking place in fashionable circles in France during the latter years of the eleventh century, the effects of which were ultimately to be felt throughout northern Europe. It appears that a certain Count Fulk of Anjou was much afflicted with corns and bunions and in order to camouflage his disfigured feet he had made for him shoes with greatly elongated and pointed toes. The new ‘fashion’ was promptly adopted by the clothes-conscious throughout France and wonderfully pleased light-minded persons, all lovers of novelty. In this country the fashion reached its most extreme in the reign of Richard II, when toes got so long that they were occasionally fastens to the garters by little chains; some beaux of the day had shoes of such extreme length that the toes had to be fastened to the waist-belt! An alternative means of support was provided by the galoche, a pointed wooden clog with a strap over the instep, into which the shoes were slipped when venturing out of doors.

The pointed galoche was introduced around the middle of the fifteenth century, but within fifty years the pendulum of fashion had swung to quite the opposite extremity, so that by the reign of Henry VII the fashion-conscious were plodding around in enormous duck-billed sabbatons. The very wide, flat soles of the new look, combined with the absence of a back to the upper must have made them the noisiest as well as the widest shoes ever known. By the time Henry VIII came to the throne the width of the fashionable bulbous toes was being exaggerated further by the addition of ‘ears’ at either side, and finally the monarch passed a law prohibiting excessively wide shoes.

Excess has never been a purely male prerogative of course, and while the longest and widest were superlatives claimed by the young men of their day the record for the highest shoes must surely go to the chopines which were the very pinnacle of fashion in the sixteenth century: made of cork and covered with decorated leather of various colours, the soles of these clogs raised their teetering wearers seven or eight inches off the ground, so that a muscular escort became as much of a physical as a social necessity.

While fashionable society lurched and clattered on its way round the social circuit, ordinary folk continued to wear comparatively ‘normal’ footwear which, although reflecting something of the trends of the day, was simply designed to keep one's feet out of the mud. If shoes today are different from their historic counterparts it is not that they have become more extreme but simply more universal, so that everyone now has the means if not the inclination to own a pair of technicolor platties, and the right to surface permanent damage to the feet in the name of fashion belongs to everyman.