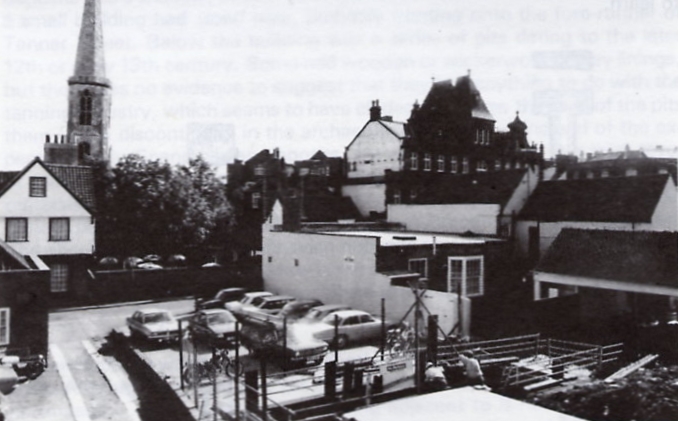 Excavations at Rougier Street, York, 1981
It is not often that there is a chance to excavate inside the Roman colonia, the civilian town. One arose, however, in spring 1981 with the proposed redevelopment of a small site between the Richard III pub and the Leedham's garage on Rougier Street, and by agreement with the architects and developers, Towngate Securities, it was decided to excavate a trench2.50m wide and 12m long. The archaeological aims of the excavation were threefold: to try to locate a Roman colonia riverside wall; to trace the development of the river frontage; and to look for evidence of the medieval tanning industry.

It has been suggested by analogy with Roman London and other towns in the Empire that the Roman colonia had a wall running parallel and adjacent to the River Ouse, but no evidence for one has as yet come to light in York. Whether this wall is found or not, however, it remains the case that very little excavation to modern standards has taken place in the colonia, and anyg limpse of Roman deposits would be useful both from the point of view of learning more about its topography and recovering samples for research into its environment. The development of the river front has been glimpsed already in Trust excavation at Skeldergate and Coney Street (INTERIM vol1 no 1 pp20-21; vol 2 no 3 pp7-11, vol 2 no 2 pp21-6) but there is still much to learn.

The medieval tanning industry is, in contrast to the colonia wall, well documented. There are references from the 12th century until well into the post-medieval period to a flourishing leather industry in York and to tanning in the area of the site, as is indeed suggested by the names of the adjacent streets: Tanner Street, Tanners Moat and Tanner Row.

The excavation started in May and a fascinating story is emerging. Modern cellars had destroyed everything later than the 14th century, but from the later 13th or early 14th century there survived a series of sandy floor deposits and a shallow, cobble-filled foundation trench which indicated that a small building had stood here, probably fronting onto the fore-runner of Tanner Street. Below the building was a series of pits dating to the later12th or early 13th century. Some had wooden or wickerwork or clay linings, but there was no evidence to suggest that they had anything to do with the tanning industry, which seems to have eluded us. Below the level of the pits there was a discontinuity in the archaeological levels — instead of the expected Anglo-Scandinavian deposits, we came directly on to a thick layer of black soil containing a large quantity of Roman pottery and building materials. However, this layer may not have been deposited in the Roman period, but may have accumulated in the post-Roman — pre-Viking period. The absence of Anglo-Scandinavian deposits presumably means that there was large-scale ground clearance in the area in the 12th century — this is a phenomenon already noted on our Blake Street site (INTERIM vol 3 no pp 6-7).

Roman deposits were reached at a depth of c. 4.50m below modern ground level. Although we have not yet examined them in detail a street running north-east — south-west and a building adjacent to it have already been found, dating to the 4th century. The street is composed of compacted layers of mortar and gravel, and the building was constructed with large limestone blocks which had sockets in them to take timber posts. It also appears to have had walls with painted wall plaster in three colours: red, green and yellow.

The rest of the story of the archaeology of Rougier Street should appear in the next INTERIM for the excavation is due to finish in early August, by which time it is hoped that the 1m of underlying Roman deposits will have been fully excavated.

No review of the Rougier Street excavation would be complete without mentioning the shoring. Excavating deep trenches is always a problem for the archaeologist and until now no method of making them safe has proved entirely satisfactory. At Rougier Street, however, a system of horizontal braces under hydraulic pressure has been used, which allows much greater working space and safety at depth than any other shoring method previously used. The equipment is not cheap, but we are fortunate in being given generous terms as well as invaluable advice on installation by Mechplant of York.