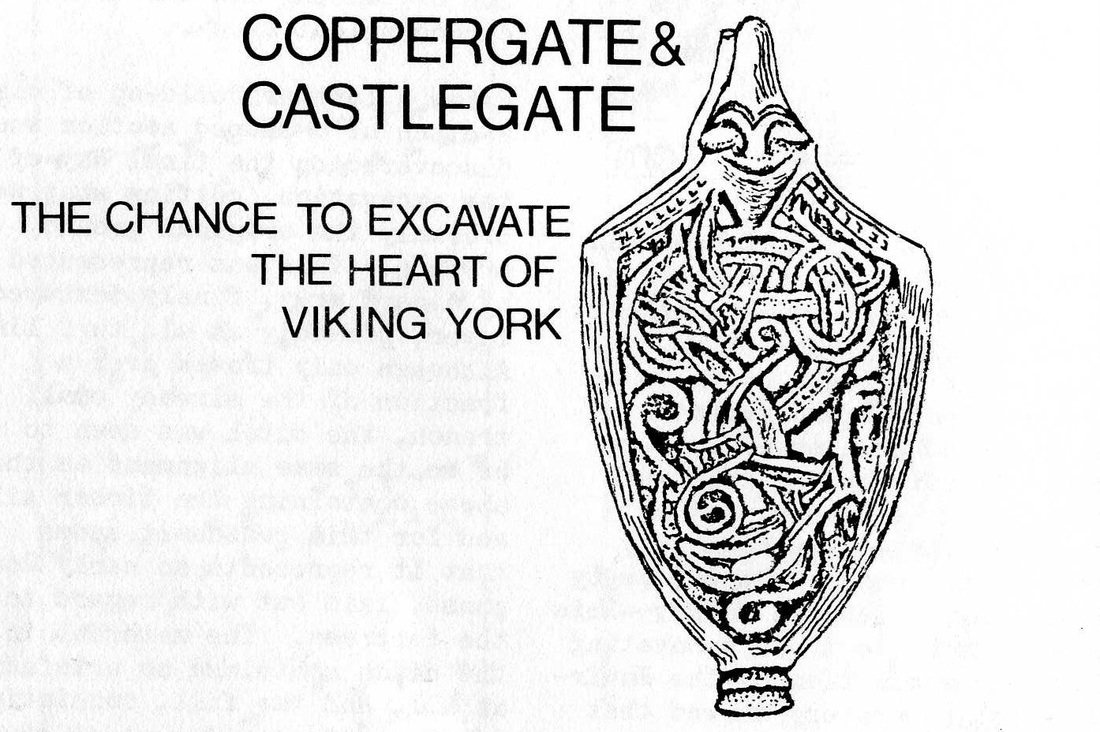 The opportunity for the Trust to excavate a large area at the hub of the Viking town was mentioned in the previous INTERIM editorial. The challenge to raise enough money to cover the cost of excavation has got off to a good start with a guarantee from the Department of the Environment that it will underwrite reinstatement costs - these days it can be more expensive to backfill a hole than to excavate it. However, the £25,000 actually needed to pay for the excavation is still being sought. A study of the archaeological implications of the redevelopment has been prepared by the Trust, and to allow interim readers to see for themselves the importance of undertaking large scale excavation on this site, we include here extracts from that report.

The area lies beyond the south corner of the Roman legionary fortress. Two major Roman monuments are known to lie within the site's boundary. The first is a main road which ran across the south-west facade of the fortress and which probably traverses Castle Yard to a ford across the River Foss behind the present Castle Museum. Beside the road there may well have been buildings servicing the requirements of the fortress. 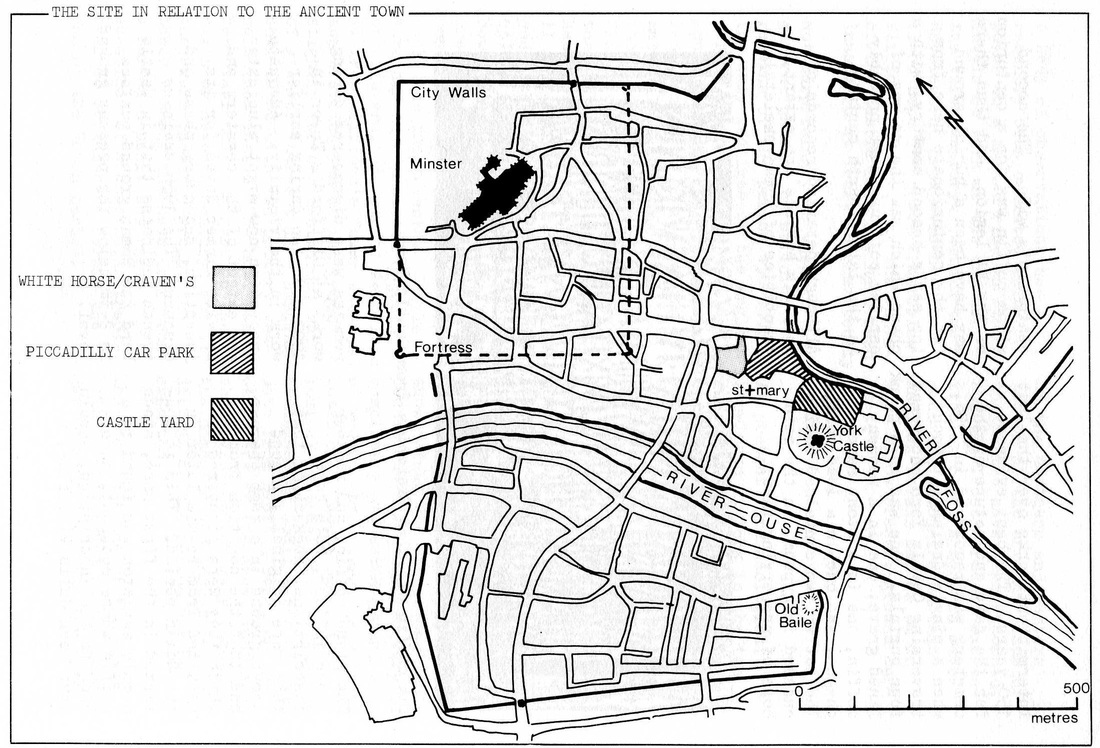 The other is an inhumation cemetery in Castle Yard, known from intermittent works over the last 150 years. The best evidence for the date and nature of the cemetery was recovered in 1956, when a single drainage trench traversing Castle Yard uncovered four burials. One was in a plank lined grave, one in a wooden coffin, one in a stone sarcophagus, and one in a lead coffin. The latter two contained bodies encased in gypsum, in the vain hope of preserving them.

The stone coffin, and another found in 1855, both bore inscriptions, suggesting that they were originally plated above ground in a tomb chamber, and that the position from which they were recovered resulted from re-use later in the Roman period. This is confirmed in the first case, since a male skeleton was found in a coffin whose occupant, according to the inscription, should have been Julia Victoria, a centurion's wife. The second stone coffin was for a centurion of the VI legion, and thus there cemetery may have been a burial ground for the centurionate here from the early second century, with a phase which saw the re-use of earlier coffins, most probably in the later fourth century. 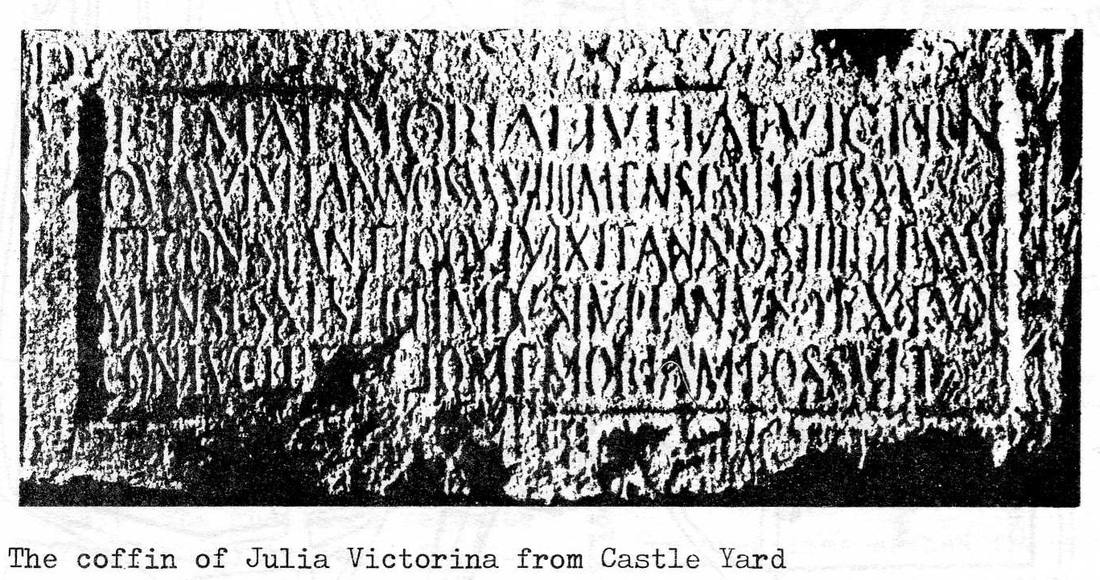 Although detailed records of only six burials are extant, quantities of human skeletal remains were discovered during works at Clifford's Tower in 1902 and also during earlier work in the vicinity. Adequate excavation now might elucidate the extent of the cemetery and provide firmer dates for its inception, secondary phase and closure. The 1956 drainage trench indicates that in Castle Yard the Roman ground surface is 2-3m below the present ground level.

A body of observations has recently been collated which point to a marked rise in flood levels at York at the end of the fifth century. Within the development area evidence for flood deposits comes from below Clifford’s Tower, but the whole of the castle area may have been inundated at least intermittently.

Not surprisingly in view of the general paucity of building remains of the period 450-850, the only vestiges of the Anglican period known from the area are sporadic small finds. Nevertheless, in terms of the amount of material of this age known they form an important group. Clifford Street, which forms the southern limit of the area, has yielded coins of Aethelred II (841-50), a lead cross impressed with a coin of Osberht (850-63), a girdle hanger and a bronze bowl, witnessing activity in the area at latest from the ninth century and probably extending into the seventh. Castle Yard has also produced objects of this era. A coin of Aethelred II from Clifford’s Tower extends the distribution of the group slightly further eastwards, but of greater interest is a hanging bowl found with two pottery vessels (now lost). The bowl has been variously assigned to the sixth or seventh century, but if they were indeed a group, the three vessels may have come from a burial deposit and raise questions of a continuing tradition of burial here beyond the end of the Roman period.

On the northern and western limits of the area no finds of the period have been recorded, but the Trust's recent excavation at Lloyd’s Bank in Pavement has demonstrated that Anglican levels may be 5m or more below the present ground surface.

At present, archaeological knowledge of York in the two centuries prior to the Norman conquest is all but limited to a body of small finds collected in most cased under conditions which did not allow the recording of associations except in the broadest sense. However, such indications as there are demonstrate that a wealth of material of this, the period of York's greatest historical importance, awaits archaeological investigation in this area. The 1902 excavations in Coppergate showed that the exceptional soil conditions allow the recovery of completely preserved ground plans of wooden structures, as well as botanical, faunal and entomological information. A relative abundance of small finds of this date from Lloyd’s Bank, on the periphery of the area, indicates that evidence for many facets of the domestic and industrial conditions of the period may be expected.

The fact that one of the seven ‘shires’ mention in the Domesday Book was ‘wasted’ for castle building by the Conqueror seems to imply a considerable build-up area north from the later Clifford’s Tower in 1067. Certainly, St Mary, Castlegate, is a pre-conquest church and may have served an area of extensive development between Castlegate and Fossgate north to Coppergate.

Coppergate itself - the name as Scandinavian in origin - is probably the boundary of Marketshire, the commercial area running from Nessgate through to Pavement, and probably another of the Domesday shires. In post-conquest times properties, certainly domestic and probably commercial, fronted on Coppergate and Castlegate, but no churches, (apart from St Mary's), religious houses or other major institutional buildings are known to have been located there. Behind these properties by the 17th century lay gardens and the marshy flood area of the Foss, and there is no reason to believe that the pattern of land use changed substantially after Norman times. The commercial and industrial area of Anglo- Scandinavian York may thus lie relatively or even wholly undisturbed by later buildings.

In the area north of Clifford’s Tower should be encountered the extension of Castlegate leading to the bridge over the castle moat and the gateway to the castle. Beyond the gateway there may be traces of the many buildings formerly occupying the bailey of the castle, and directly to the north of the tower some indication of the second bailey that is thought to have existed. The importance of the castle, not only to the history of York, but also on a national scale is well known. The need to elucidate its early history would require a thorough examination of levels which could elsewhere be moved through more rapidly. Beneath these levels there can be little doubt that the Anglo-Scandinavian and Roman towns would be further represented, although there has been considerable disturbance in this part of the area.

The Trust has the chance to excavate in advance of the first phase of the scheme, in Coppergate, for a period of two years. This time will be needed in view of the depth of deposits and the size of the area. With additional labour, the hire of machinery, shoring materials, etc, some £25,000 will be needed in that time. These funds might formerly be expected from local and national government sources, but in the current economic climate it seems likely that grants will only be sufficient to maintain projects already in progress. The Trust is so convinced of the particular importance of the opportunities at Coppergate/Castlegate that it is making a special effort to locate specific extra funds for this project....