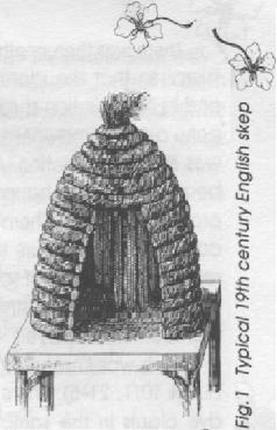 The Coppergate 'Beehive'
Way back in 1977 one of the large team of technicians then available to the Environmental Archaeology Unit (EAU) came rushing excitedly from the Sample Preparation Room. They had 'found a straw rope' in one of the Anglo-Scandinavian samples from 16-22 Coppergate (Sample 427 from Context 7553) and wanted to know what they should do with it. Inspection showed that the object consisted of bundles of plant stems which seemed to be twisted together in a way which suggested plaiting, and either the whole 'rope' or the major bundles of it appeared to be loosely bound with thin wiry stems of some kind. Naturally we parcelled up this intriguing object safely and dispatched it to the YAT Conservation Laboratory for the treatment needed to preserve it. So far this was a fairly routine event in the EAU, and one which normally would have been forgotten, at least until we wrote the site up, as soon as the next exciting find was made.

Life rarely progresses evenly, however, and the 'straw rope' was to become one of the greatest embarrassments of the writer's professional life. Just previously, we had discovered thousands of fragments of what appeared to be bees in a Coppergate sample. Closer inspection showed that the remains included many wings, and that these had a pattern of veins which resembled specimens of honeybees culled from a friend's backyard hive. It soon emerged firstly that the 'straw rope' was from a context related to the one containing the bees, and secondly that the sample from which it came also included abundant bees. It was at this point that I must have lost my presence of mind, and I allowed myself a speculation: was this 'twisted straw' part of an Anglo-Scandinavian bee skep? Bee skeps — domed hives — were widely used until quite recently. Figure 1 shows a typical form, but they varied considerably in shape, construction technique and the material of which they were made.
Making the connection between twisted plant remains and bees to make a skep and hence beekeeping by the occupants of a tenement on Viking Age Coppergate, seemed reasonable, as a working hypothesis and I presented the data and suggested this interpretation at a number of lectures. The story soon 'got around' and much to my surprise a succession of telephone calls from bee-keepers and enthusiasts of all kinds soon followed. I repeated the facts to these people — there were bees and there was apparently twisted and bound plant material — and stressed the unproven nature of the 'skep'. Things — in terms of bees — then went quiet for a while. After a time, however, my observations appeared in various publications — sometimes, unfortunately, presented less cautiously than I would consider desirable. The progressive development of the Tale of the Skep by archaeological 'synthesisers', like The Case of the Chicken-Raising Tanners at Lloyds Bank, deserves inclusion in a study of the origins of archaeological received wisdom. In at least one case the hypothetical skep appeared as a very definite one, with the identification ascribed to me. I groaned, and resolved to be even more careful in future.


There was then another lull. of some years, until the EAU team came to carry out the main study of Coppergate. The bees were sent to the Natural History Museum in London, and were definitely identified as honeybees, Apis mellifera, by an expert. We asked YAT to find the 'skep' so that the plant material could be identified, and its construction studied, only to discover that it had gone astray somewhere between the EAU and YAT. This was deeply frustrating, since while we scientists like to be right, and are happy to be proved wrong, an unproven case is anathema, and without the object, how could we ever be sure what it was? We could find the remains of the bag of soil from which the object came, but the only faintly 'straw-like' plant material left in it was identified as dyers' greenweed (Genista tinctorial) - which was immensely common at Coppergate (INTERIM 10/1, 21-5). There were also fragments of other dye plants in the sample. I remembered the original object only rather dimly by this stage (some ten years after I saw it), so felt unable to state with certainty exactly what it had been like. Thus all we can do is to say that there may have been a skep, but such solid evidence as there is suggests otherwise. And there the bee skep story rests — profoundly unsatisfactorily.

The story of the bees themselves has continued in a more positive vein, however. In 1989 I was approached by two amateur bee enthusiasts, the Reverend Eric Milner and John Dews. These two were passionately interested in the British Dark Bee — the supposed North-West European wild, native, honey bee. They wanted to measure the angles of the wing veins of the Coppergate fossils, since these angles are characteristic of different races of bees. Their aim was to establish that the British Dark Bee really was the ancestral British form by proving that the Coppergate bees belonged to it (or - being open-minded scientists — that they did not and that their hypothesis was wrong). I had nurtured half-hearted intentions to do something like this myself, with no good idea as to how to start, so I readily obliged by lending these gentlemen the Coppergate bees, together with a similar cache of honeybees from an early medieval site in Oslo (the 'Sondrefelt' site). They were able to find enough well-preserved wings in both cases to show that they were effectively identical to the Dark Bee, which was very satisfying. Figure 2, drawn by my colleague Dr E. P. Allison, shows one of the better preserved wings from Coppergate, together with one from a modern honeybee. 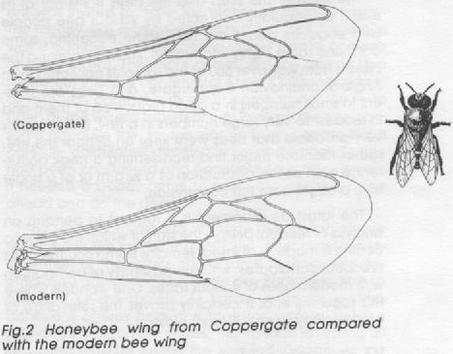 The Oslo bees have also caused a stir, since it had been stated on historical evidence that honeybees were a late introduction into Norway, clearly not the case as my material dated to the period AD 1175-1225.

Another aspect of beekeeping in Viking Age York is the considerable number of records of beeswax from 16-22 Coppergate. The remains range from tiny fragments, of which many have been found, to a large block which clearly showed the cuts made by using it to wax a thin twine. Incidentally, the technique employed for identifying beeswax is a remarkably simple one — it is gently touched with a heated needle, when the characteristic and delightful aroma of beeswax can quite distinctly be smelled.

The saga of the skep and the bees is still not at its end. I am regularly contacted by various bee people with enquiries about the find, some eccentric, some daft, and some highly informative. I have examined the insects from well over 500 of the samples collected from Anglo-Scandinavian Coppergate, and bees are present in small numbers in a good proportion of them and in modest to very large numbers in a few. It thus seems very probable that bees were kept on or near the site, rather than the major find representing a freak occurrence such as the destruction of a swarm or of a single hive brought from the countryside. The latest development is a request to perform an analysis of residual DNA — the stuff of which the genetic coding is made — of insect remains from York. The bees are Ideal candidates, with the possibility of comparison with modern bees of various races. One wonders where this saga will end; it certainly proves the relevance of archaeology to mainstream biology.